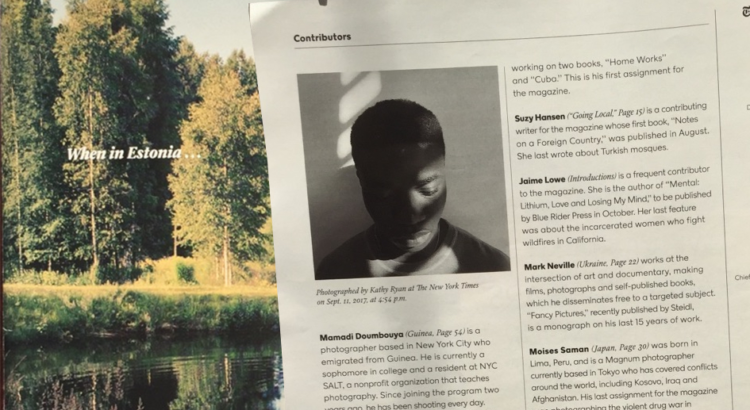 Teaching is often about the small victories. The flash of interest from an otherwise disengaged student. The slow, but steady rise of low grades. In a profession where the big picture can be overwhelming, focusing on baby steps makes sense. Sometimes, though, a major battle is won and it fills a teacher with the intoxicating effect of a drug, but with none of its side effects.

A former student of mine (Class of 2016) publishing his photos in the New York Times Magazine, (yes, the one tucked into the bulging pages of the Saturday Edition) certainly falls into this category.

Mamadi was a 15-year old sophomore from Guinea, a small country on the western coast of Africa, when he walked through the doors of Advanced Math & Science II. One of ten students in my pull-out ESL class, he worked hard to learn English and to adapt to a culture that could not be more different than the one he had left behind. Pronouncing English words was difficult for Mamadi, but even if he had been a fluent English speaker, his innate feel for visuals meant that he preferred images to words.

Mamadi had a strong sense of self directed responsibility which motivated him to excel in his school work. He was also maddeningly immature at times. A memory that stands out: Mamadi and a few other African students arguing about who has the heaviest accent.

One day, he brought a camera to school. It was a Nikon DSL-R and he was just starting to master its manual controls. Since photography is one of my interests as well (I would start teaching the elective Film & Digital class the following year), he often came after school to talk shutter speed and lenses.

His camera became a familiar sight and when I haven’t seen it for a while, I asked him about it. He told me his father had taken it away, deeming it a waste of time. He urged Mamadi to concentrate on a responsible future working in the family’s cell phone retail store.

Mamadi’s photos kept getting better and better and during his senior year, he asked me to write a recommendation to NYC SALT, a photography program which fosters the visual creativity of inner city youth. It’s an intensely competitive and serious program. Upon acceptance, students are given a professional camera and are expected to complete weekly assignments. Missing classes and deadlines will get a student expelled.

I still remember Mamadi voicing his doubts in his usually shy manner. He didn’t think he had a chance. Having seen his photos and his progression as a shooter, I felt confident about his chances. I wasn’t really surprised when he told me he got in a few months later.

By then, Mamadi was shooting every day. Using the school’s first lighting kit, he experimented with portrait photography and captured striking close ups of his (mostly female) classmates.

Toward the end of his senior year, Mamadi, along with his fellow SALT photographers, exhibited his work in a professional downtown studio. Wealthy donors and art educators mingled with parents to see the vision of New York City youth from neighborhoods whose voices are too seldom heard. Visitors were encouraged to engage the artists and to buy prints.

Mamadi graduated in 2016 and went on to college. He remained closely associated with our school and the NYC SALT Program. I haven’t heard from him in a few months while when he called me out of the blue in August. He said The New York Times Magazine invited him to travel to Guinea and to take pictures for an issue dedicated to depicting how families around the world spend their summer vacation. The photo editor of the magazine saw Mamadi’s work at the exhibit, which prompted the assignment.

The ten-day journey led him through the landscape and villages Guinea and culminated in Mamadi photographing family members. The formal portraits of grand-uncles and grand-aunts show a culture defined by colorful, traditional attire and strong familial bonds. The photos reveal a  subtle talent behind the lens, a quiet observer who captures the smile behind the neutral expression, the fluid emotion behind the rigid pose.

The September 24, “Voyage Issue” of the magazine sits at my elbow as I type this at my teacher’s desk. Mamadi’s layout is complemented by work from Japanese, Chinese and Estonian photographers, among others. It’s past five o’clock and the hallways of the school are eerily quiet. The last thing I think of before I slide the magazine into a drawer is that I should make a file folder for Mamadi’s future work.

It’s bound to be a thick one.

Click on the link below to see Mamadi’s work on the magazine’s web site.