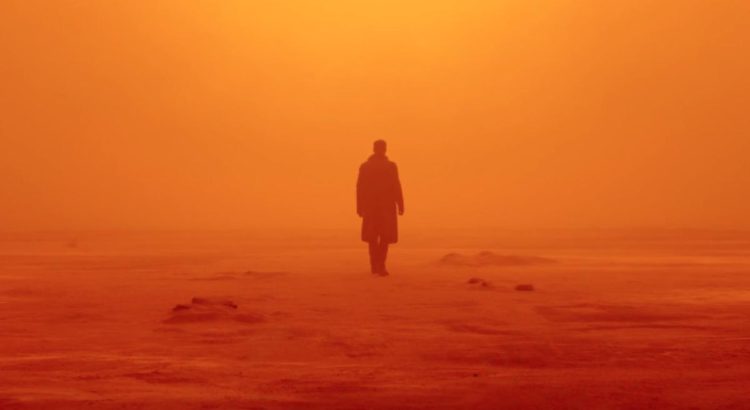 The previews were halfway through when we nestled into our seats in the IMAX
screening room. On the screen, an odd collection of superheroes squared off in the
obligatory Superheroes Bond scene. Acrobatic fight moves that are only possible in the
digital realm, (where gravity joins plot as the latest casualty) with lightning quick cuts
and ear-bleeding levels of metal gnashing upon metal. Once the digital dust settled,
came the Quip, the clever line spoken by the latest addition to the superhero roster. His
costume was earth-toned and looked an unholy mix of a Richard Simmons trainer outfit
and an SS uniform. The audience responded to his joke by digging deeper into their
sacks of popcorn.
I mention this, because Blade Runner 2049 could not be more different than the
comic book drivel being churned out by the major Hollywood studios. Its emphasis is on
ideas over plot, acting over special effects (which are nevertheless stunning) and
human interaction instead of the deafening clash of humans versus metal.
With Denis Villeneuve at the helm, this is no surprise. This is a director who
managed to make his film, Prisoners, feel as it was taking place on foreign soil instead
of the rural American Northeast. This was not so much due to the strangeness of the
story, but the cinematic weight given to even the smallest moments, as if an old-school
European director was searching for the heart of a universal theme.
Blade Runner is similar in that in does not invite the audience to follow along, so
much as demands it. The film never talks down to viewers and assumes an attention
span usually reserved for the “personal film”. On the level of plot, there is not much to
say that won’t spoil the surprises, but strangely enough you don’t need to know the
specifics in order to write about the large questions the film raises.
And those questions are on the grandest of scales. Much like Kubrick used 2001:
A Space Odyssey to explore the future of humankind among the stars, Blade Runner
explores the universal question of what makes a human a human? Along its two-and- a-
half hour journey, the movie offers suggestions, but no clear-cut answers.

Is is a soul? But if a soul is nothing more than an inner voice that dictates
principles, how is it different from a replicant programmed to “hear” that same voice? At
a fundamental level, we are not much more than a few letters of the alphabet arranged
in endlessly varying sequences. As one replicant says, replicants are made up of 0s
and 1s (digital) and humans of letters (genetic code). It is at the intersection of the
genetic code and the digital domain where the lines between human and replicant are
blurred, allowing the most interesting questions to bubble to the surface.
In the film, a breed of replicants see themselves as a labor force enslaved by
humans. It is difficult not to be reminded of human slavery, (an uncomfortably recent
phenomenon in U.S. history), where slaves performed manual labor which made their
masters wealthy. Wasn’t one of the pro-slavery arguments that blacks are not fully
human, therefore their enslavement is justified? Will some technocrats make the same
point in the not-so- distant future to justify exploiting replicants who have the capacity to
feel pain?
Hampton Fancher and Michael Green, the writers of the film, take full advantage
of this minefield of inquiry and Villeneuve is savvy enough to let the story do the heavy
lifting. All other aspects of the production from cinematography, production design and
costumes fall in line with the story’s perspective. Even though the film is gorgeous, it is
never affected in the way the original Blade Runner was.
The acting, however, is closely linked to the original, with Harrison Ford slipping
into the into the skin of the laconic hero with understated ease. The real magic comes
from Ryan Gosling who manages to look passionate even when he projects the
disaffected persona of the professional blade runner. A human playing a replicant who
believes he has the qualities of a real human must have been a real challenge. Far less
convincing is Jared Leto as Wallace, the tech inventor, who has designed a new breed
of replicants for reasons which border on the mystical. His costume is tecno-hippie,
complete with a prophet’s beard, his words are not a means of communication, but a
way to speak grand pronouncements into the ether. As such, his dialogue could have
used some trimming.

The same applies to the film as a whole. There is no reason why this film should
be two and a half hours. It simply means that when Ryan Gosling’s Detective K. crosses
the lobby of a building, he takes a full minute to do so. Just because there are no plot
points to hit over the head (as in a traditional action movie), doesn’t mean we should
take the longest route possible. Even if we agree that the unfurling of complicated
themes takes time, the law of diminishing returns applies.
Even so, Denis Villeneuve has emerged as one of the best and most interesting
directors of our times, to be mentioned in the same sentence as Christopher Nolan. For
these filmmakers, entertainment and spiritual quest are not mutually exclusive. One
drives the other in a way, that even when their films do not succeed on all levels, they
cannot be simply shrugged off.

2 thoughts on “Humanity in the Time of Replicants”