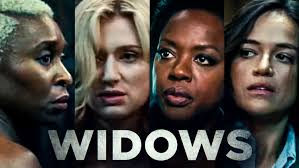 Shocked at how unmoved I was by Widows, I combed through major print reviews of the film. Being that I go into every movie with the expectations of Christian fundamentalist awaiting a miracle, I had to see if others shared my disappointment.

It’s obvious that I didn’t see the film most people, (which includes critics), did. Instead of a stylish heist movie which explored female empowerment while illuminating race relations in modern-day Chicago, I saw a film that meandered between themes, like a college freshman vacillating between topics for a term paper.

Widows begins with promise.  A heist gone horribly wrong leaves the four perpetrators dead.  Unanswered questions is not the only thing their widows have to face; it turns out their husbands were in debt to a nefarious gangster named Jamal, who is now coming to collect. Fortunately, Veronica (Viola Davis) finds a notebook her husband Harry (Liam Neeson) had left behind, outlining the details of his next score.

Veronica decides to carry out the heist with the help of two other widows, Linda (Michelle Rodriguez) and Alice (Elizabeth Debicki). If only the film has stuck to this intriguing premise. But things are never that simple in this story.

Jamal, in addition to being a ruthless gangster, has political ambitions.  He is running for alderman against Jack Mulligan (Colin Farrell) who, hailing from a (white) political family, is the favored  candidate. The rivalry gives us a scene between Jack and Jamal and in which the concept of the neighborhood’s changing demographics are lamented, but never connected to the main plot. It also shows us Jack’s father, Tom Mulligan, (Robert Duvall) who expresses dismay at the prospect of an n-word becoming alderman of his district.   To make ends meet, Alice becomes an escort and reminds us that often, men with money  treat women as objects.

And so on. Meanwhile, the heist becomes so complicated that even Linda’s babysitter, Belle, (Cynthia Erivo) has to get involved. Jokes which poke fun at how unprepared the privileged women are in planning, much less carrying out a heist mostly  fall flat.

The performances are strong throughout, but in the absence of a focused script, the actors do the heavy lifting. Daniel Kaluuya of Get Out fame finds himself in the role of Jatemme, a Joe Pesci-type enforcer/psychopath. This means he commits one sadistic act after another, but without the banter, or the softening touch which made Pesci’s portrayal so powerful (yes, he’s a psychopath, but he  is loyal to his friends).

Halfway through the film comes a twist which is puzzling  until we remember that Gillian Flynn co-wrote the screenplay. The surprise has a Wild Things (the 1998 film with Neve Campbell) feel in that it is neither impactful, or motivated by deeper forces.

Style-wise, Widows is one of those films where the importance of a scene is directly related to how few edits are used in its telling.  The more bombastic a scene, the more likely that it is shown it one take.  The technique is  a favorite of student filmmakers who believe that “long take” is synonymous with “art”. Still, there is one scene where this approach pays off. A long take ends in bloodshed and the absence of cuts gives it a realistic edge. But mostly, what passes for style in this movie is a wide frame, with mirrors reflecting things in a way  that ought to be meaningful but isn’t.

Perhaps I have missed something (everything) in this movie. If you loved, or even liked Widows, drop me a line.