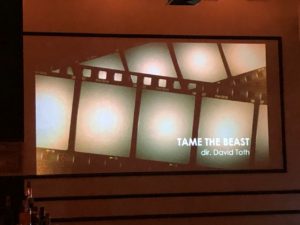 For me, the Syndicated Bar & Theater was love at first sight.

How could it be otherwise when you’re dealing with a bar/restaurant that contains a full-sized theater? And plays new, as well as throwback movies? I’ve seen countless movies at the Syndicated since moving to Bushwick (usually accompanied by a bottle of wine) and it never gets old. Unless  you’re watching Tarkovsky’s “Stalker”. I leave that one to the academics. 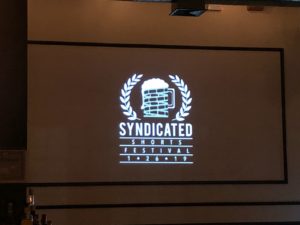 Anyways, Syndicated’s programmers, Brendan O’Donnell and Jake Levitt, responded to requests from local filmmakers who wanted to see their work on the big screen by programming them before appropriate feature films. For instance, my very own stop motion film, “Tame the Beast” played before “A Nightmare Before Christmas” in December.

On Saturday, January 26, the chosen shorts were played in a 50-min block, which played twice, both to packed a house. After each screening, audience members were given the chance to vote for their favorites for an Audience Award.  SPOILER ALERT: “Tame the Beast” didn’t win. 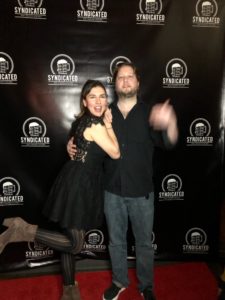 It was a great night for several reasons.  Short films are usually labors of love and are rarely seen on the big screen. Given that each short played before features for a few months, means at least a thousand eyeballs, according to Brendan O’Donnell. It’s difficult to achieve that many views even on a platform like YouTube.

Seeing the shorts with an audience is also a different experience than watching it on your iPhone while you’re trying to hold on to the subway pole. The shared laughter, gasps of surprise are part of the communal experience of moviegoing. As Robert McKee says, in a dark theater, the collective IQ of the audience jumps 10 points. The stakes are higher. On the big screen, there is no place to hide.

The quality of the films was refreshing; each had a unique perspective and approach. There were several animated films, one music video, one comedy and one documentary. On a technical level, they all delivered the high resolution, crisp images and smooth edits one expects from a skilled filmmaker.

I’m proud to have been part of the lineup and hope to debut my new short film, (currently in post-production) at the Syndicated in the spring. First Rites – trailer

If you’re a filmmaker who wants to see his or her work on the big screen, submit to the Syndicated Shorts Festival here: